With the Olympics opening in London today... 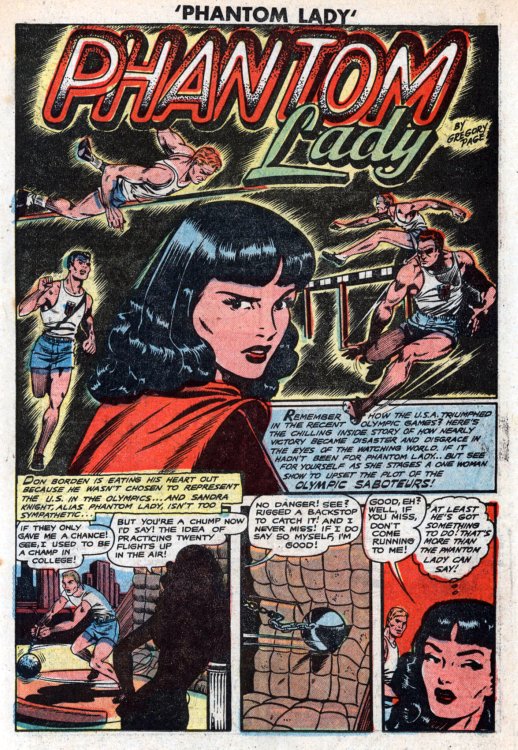 ...let's look at how our svelte superheroine handled problems at the 1948 Olympics, which were also set in London! 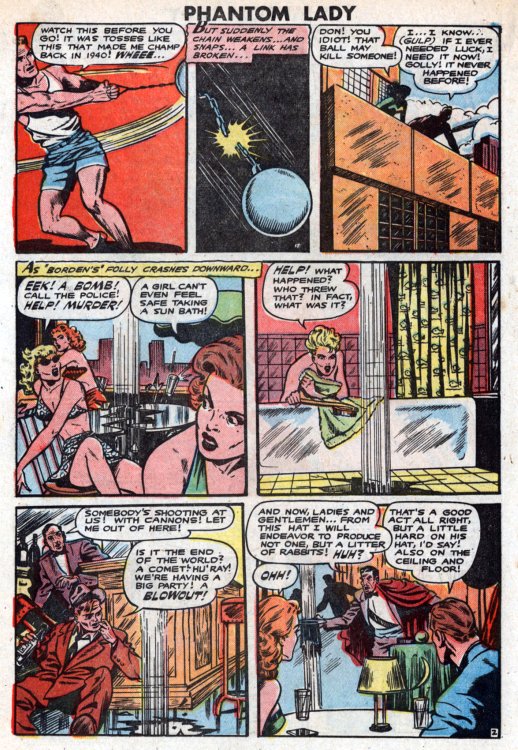 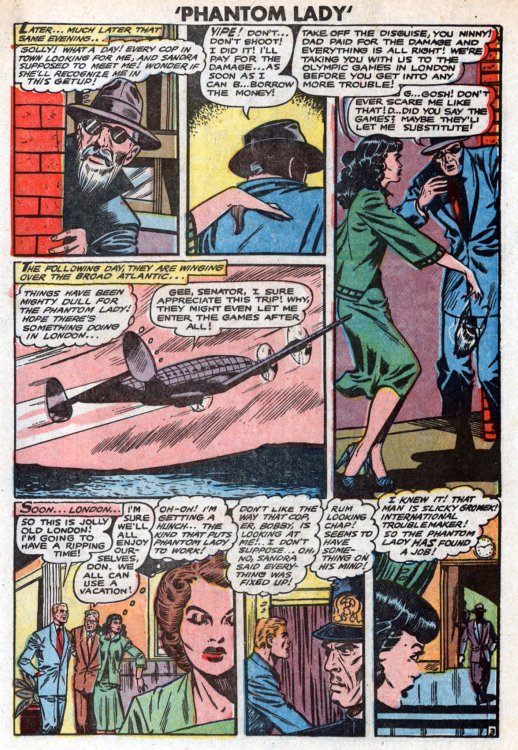 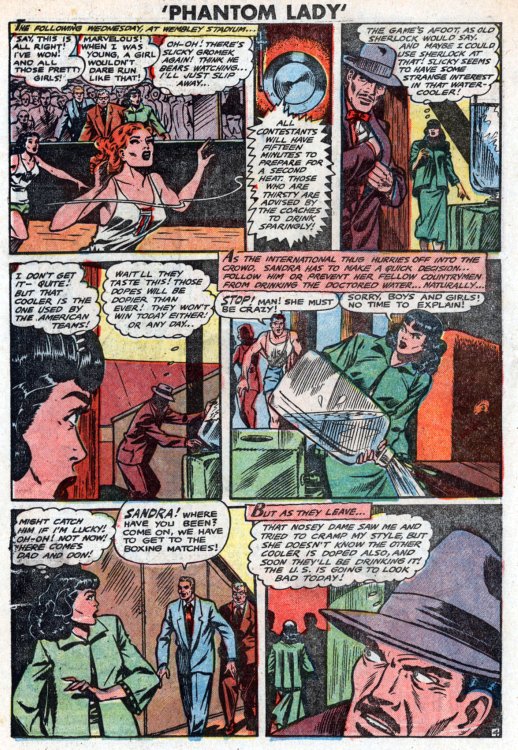 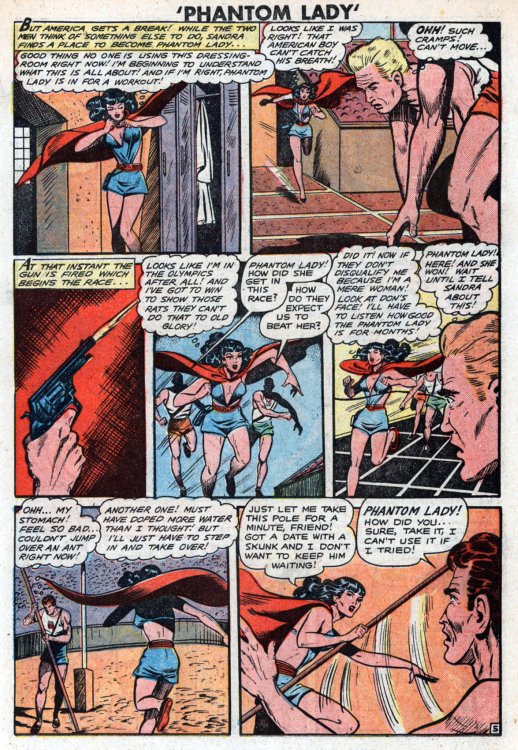 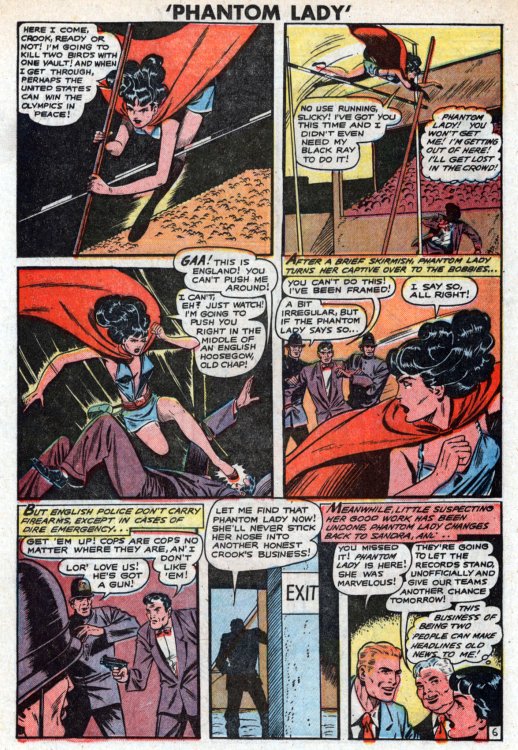 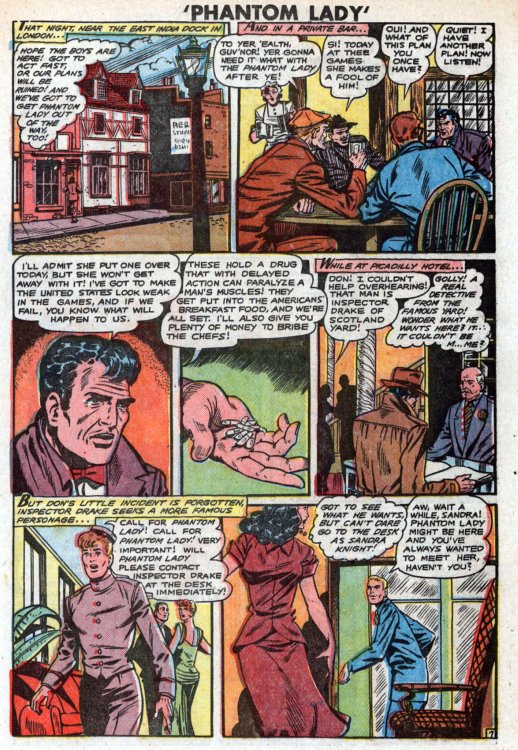 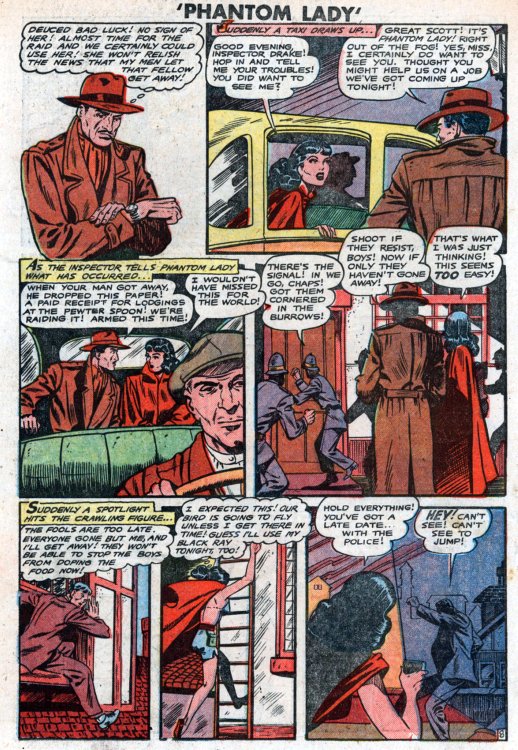 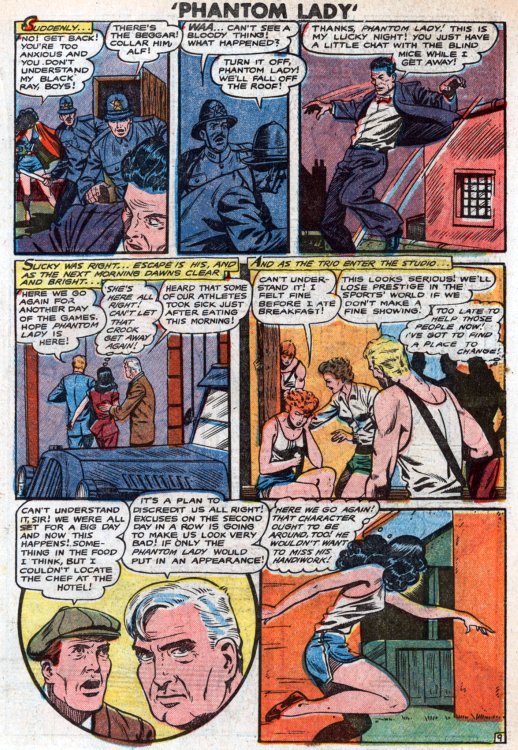 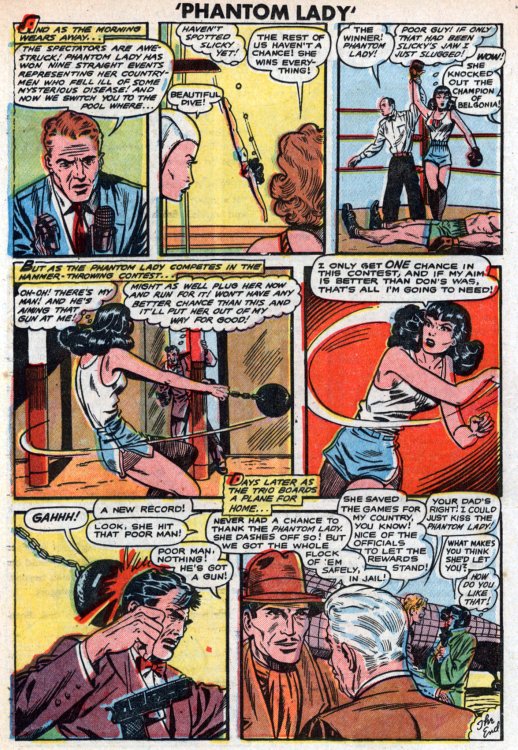 This story appeared in Fox's Phantom Lady #22 (February 1949), which was on-sale in October or November 1948.
The Olympics took place at the end of July/beginning of August.
With a normal three-month turnaround for a comic's creation/production/printing, this tale was probably written and illustrated around the time of the 1948 Olympic Games.
The story was most likely written by editor Ruth Roche (as most of the Phantom Lady stories most likely were).
The artist is unknown, but is clearly not Matt Baker, who helped define the character's look.
If you want to see the complete Fox/Ajax run of Phantom Lady (except for this story), click HERE.
Support Small Business!
Visit our

UNDERCOVER GIRL "Puzzle of the Picture" 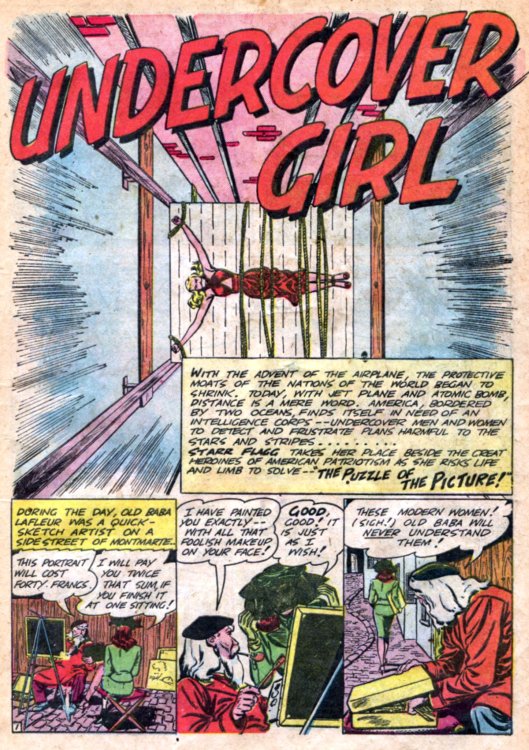 So, it stands to reason that girl spies would be popular in fiction, right? 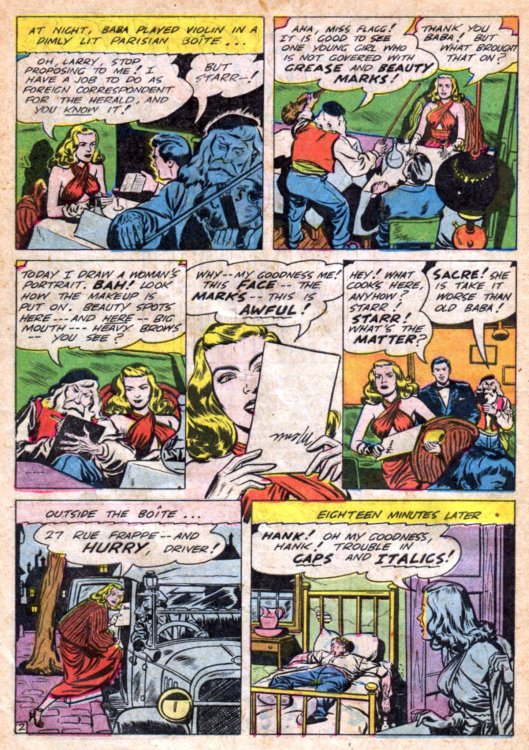 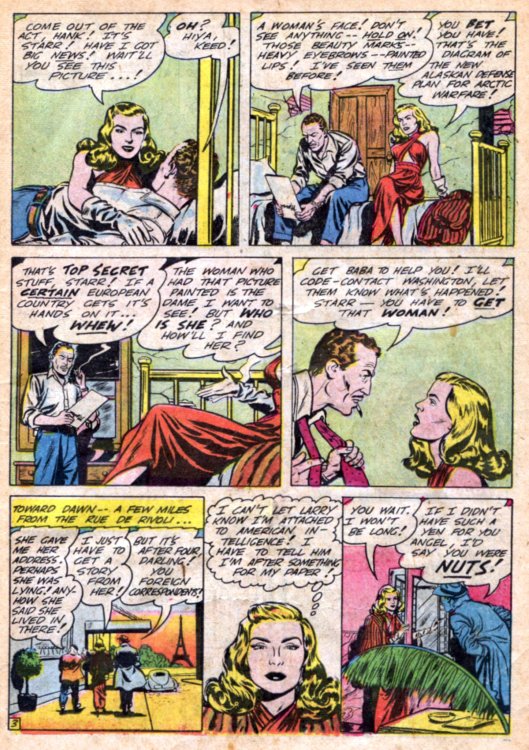 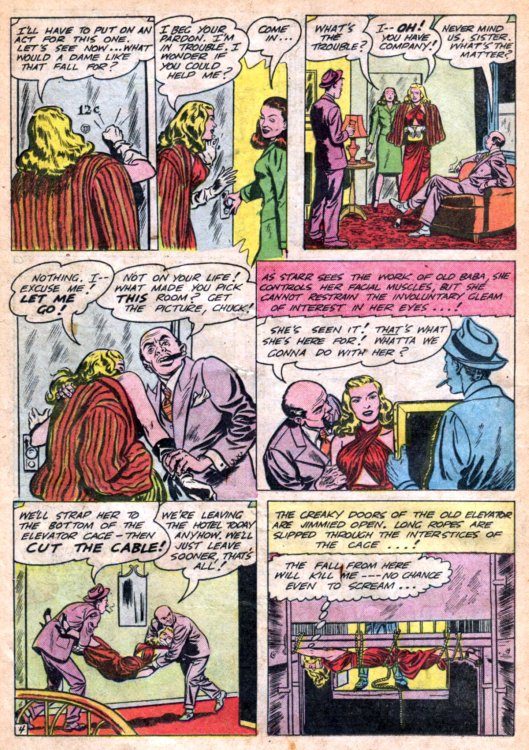 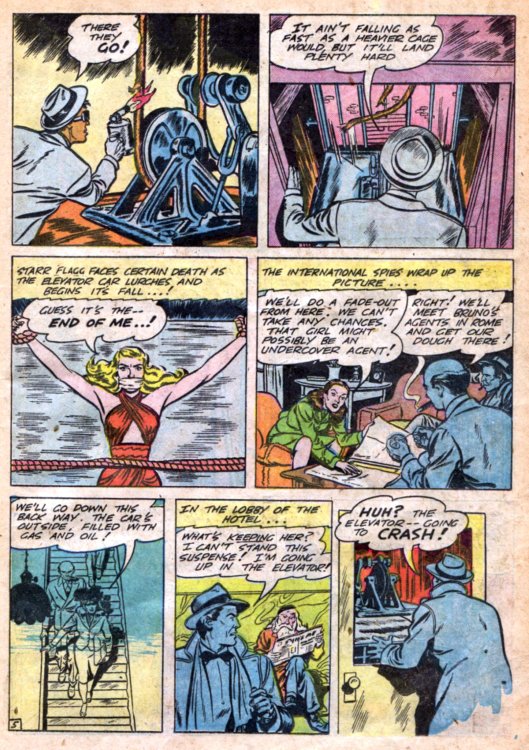 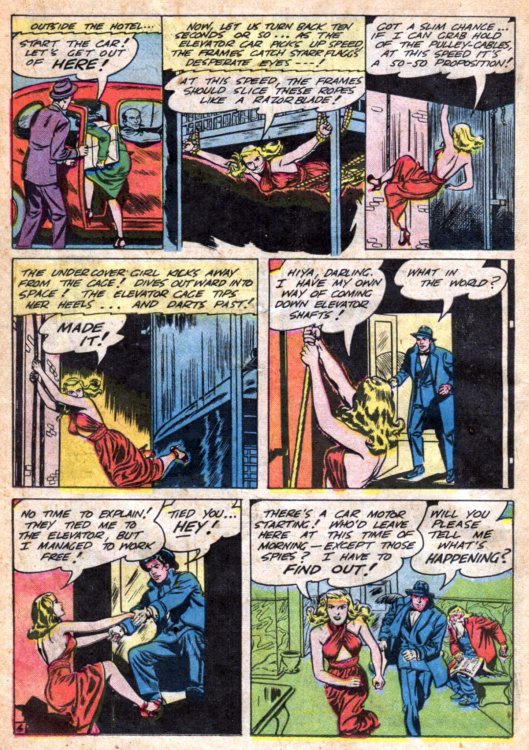 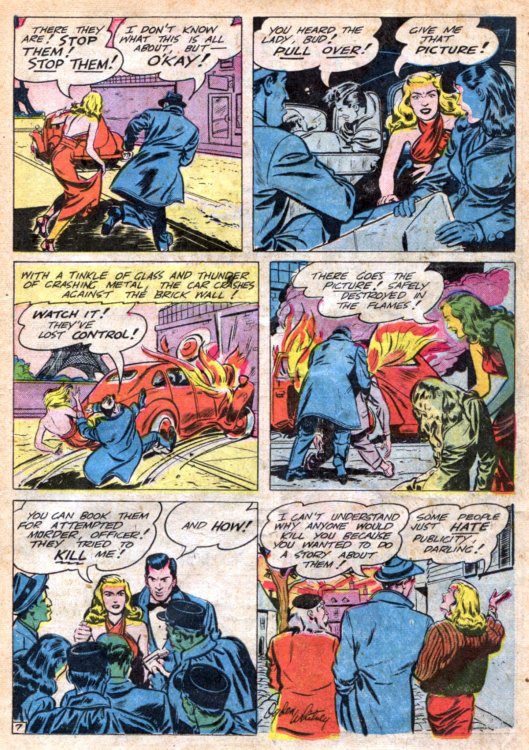 With the notable exception of Modesty Blaise, female secret agents have not been able to hold the spotlight, despite several attempts to crack the glass ceiling of spydom including Senorita Rio and Miss Espionage, both of whom we've presented in this blog!

In comics, the 1950s Undercover Girl series from Magazine Enterprises was probably the best of the femme-spy genre.
Featuring art by luminaries like Odgen Whitney, Bob Powell, Gil Kane, and Dick Ayers, the series detailed the exploits of government agent Starr Flagg against spies, saboteurs, and criminals.
Starr could shoot and fight as well as any male agent, but could also play helpless and innocent to throw the baddies off-guard...until she could kick serious butt!
Beginning with the tale presented here from the first issue of the anthology title ManHunt, Starr Flagg's adventures were a regular feature during the book's run.
In fact, she was popular enough to receive a three-issue run of her own title (with reprinted stories, but new covers).
But, when Magazine Enterprises folded, UnderCover Girl disappeared from the newsstands.
She wasn't even in the recent Project SuperPowers series by Alex Ross, which revived almost every non-DC or Marvel character from comics of the 1940s-50s!
We hope you enjoyed her debut story from Magazine Enterprise's ManHunt #1 (1947) as illustrated by Odgen Whitney.
Be here next week, when we present another tale of classic comic grrl power!
Visit Our

MODELING WITH MILLIE "Millie the Marvel"

If you think Marvel and DC are rebooting their characters more frequently than ever... 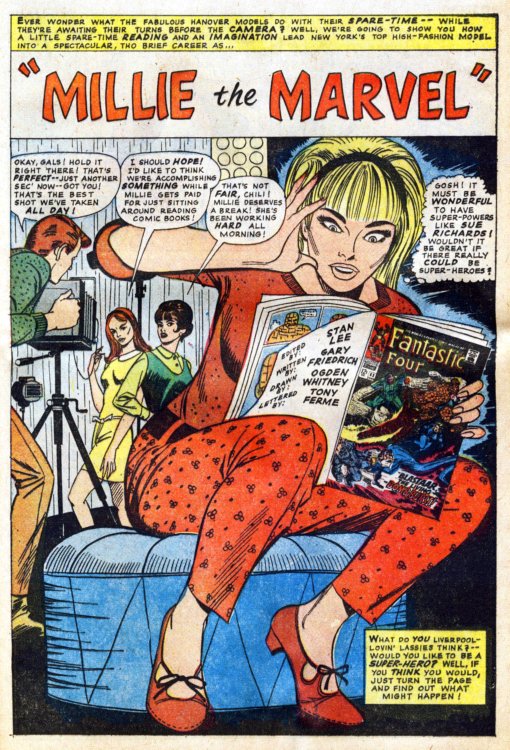 ...you've never followed the many incarnations of Millie the Model from 1945 to the present!
This particular story is from the early Silver Age "romance comic" phase of her career. 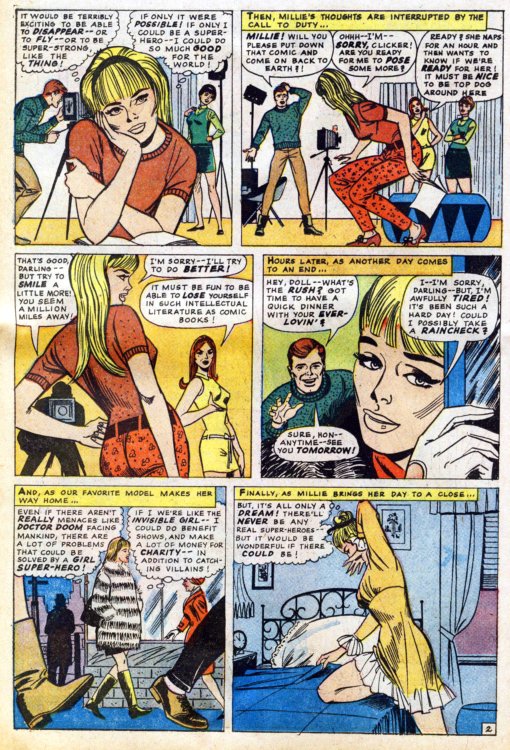 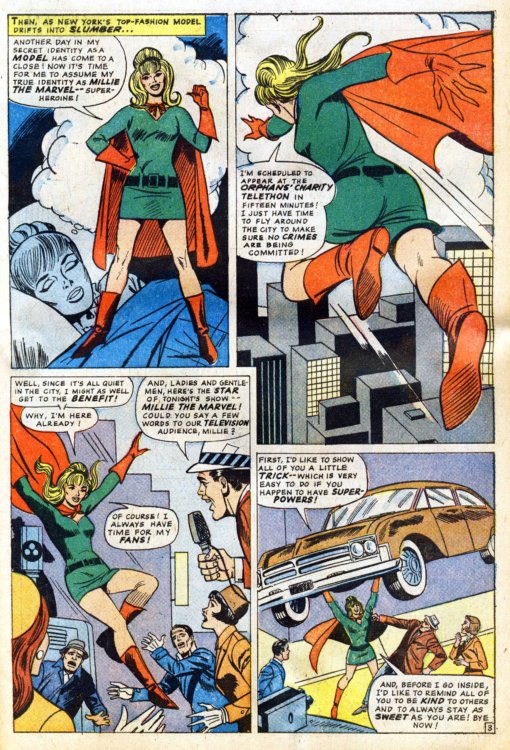 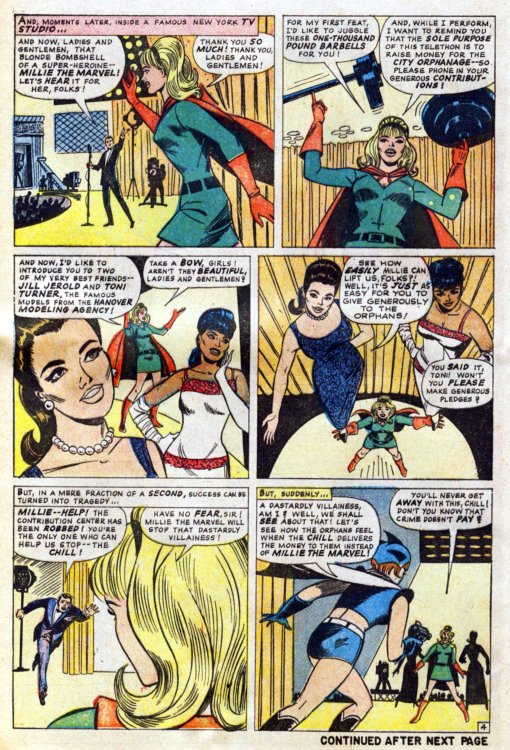 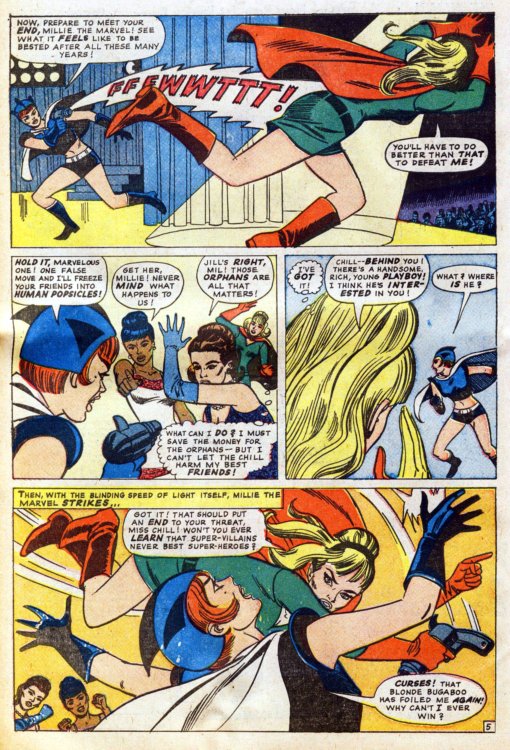 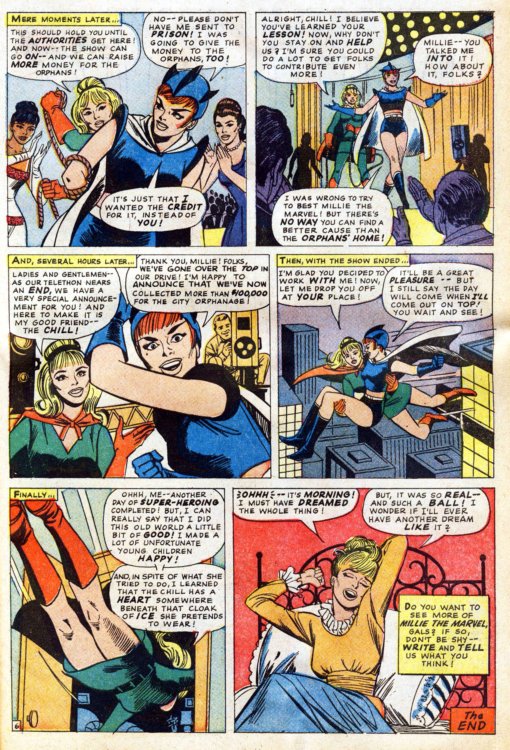 This never-reprinted story from Modeling with Millie #54 (1967); written by Gary Friedrich, penciled by Odgen Whitney, and inked (uncredited) by Frank Giacoia; was Millie the Marvel's only appearance.
It was also the final issue of this particular title.
Over at her ongoing "sister" title, Millie the Model, the character returned to her previous Archie Comics-influenced format, once more becoming a teen-humor title without ongoing storylines.
Trivia: From 1945 to 1973, there was always at least one Millie title from Atlas/Marvel, for a total of five different series, plus annuals, a couple of one-shots, an ongoing series in Comedy Comics, and a spin-off series for her rival, Chili!
Her main title ran for 207 issues, and was, until Fantastic Four #207 came out in 1979, Marvel's longest-running character-named book!
(Books with longer runs like Mighty Thor, Incredible Hulk, and Captain America had different names [Journey into Mystery, Tales to Astonish, and Tales of Suspense, respectively] before becoming "character" titles.
Millie's flagship title was always Millie the Model!)
Millie was rebooted several times going from a romance/humor hybrid to Archie-style humor to romance/soap opera and finally back to Archie-style humor with changes to the characters' ages, professions, and relationships at each stage.
Millie Collins, despite being shown as outside the Marvel Universe in this tale, has appeared as part of the mainstream Marvel universe in several titles, including the "Wedding of Reed and Sue" in Fantastic Four Annual #3 (and Marvels #2), Dazzler #34, Sensational She-Hulk #60, and the Models, Inc mini-series.
In the 1980s, a middle-aged Millie appeared in the Star Comics mini-series Misty, about the teen-age daughter of Millie's brother!
(The best thing about this Trina Robbins-produced mini-series was the retro look and use of readers' designs for the characters' clothes.)
Millie was scheduled to be rebooted in 2003 as a teen-age tennis player in a manga-style mini-series called 15-Love.
When the project was finally published in 2011 (yeah, eight years later), the lead character was Millie's teen-age niece (though Millie herself did appear briefly)!

Be here next week, when we present another tale of classic comic grrrl power! 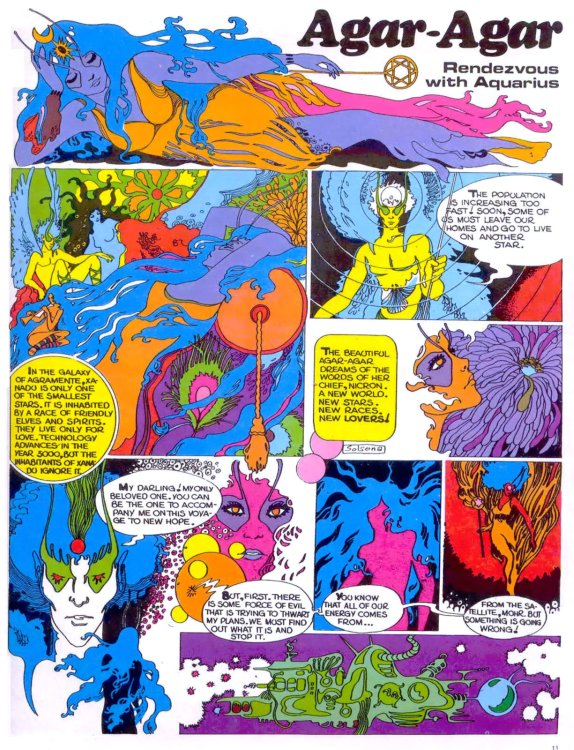 ...and the psychedelic world of Agar-Agar, the wildest space-heroine since Barbarella! 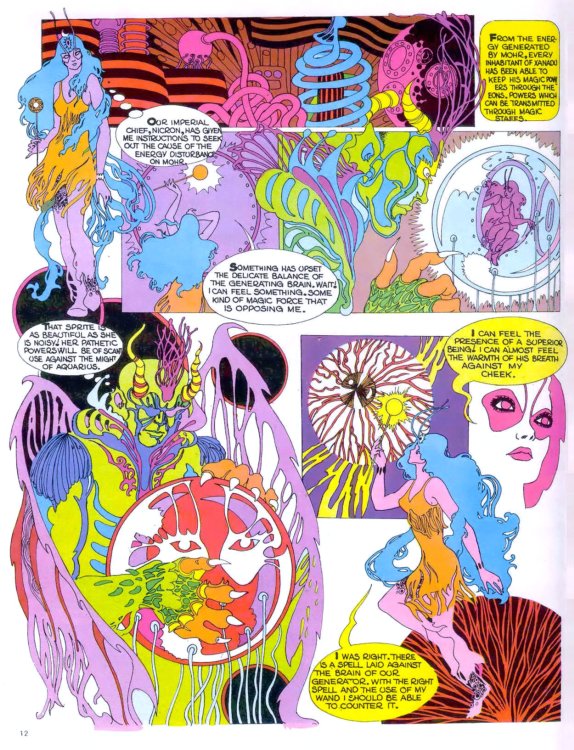 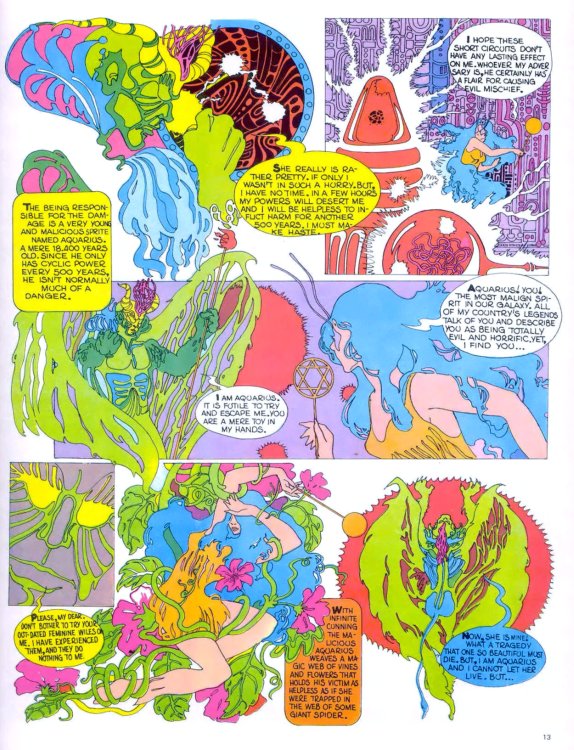 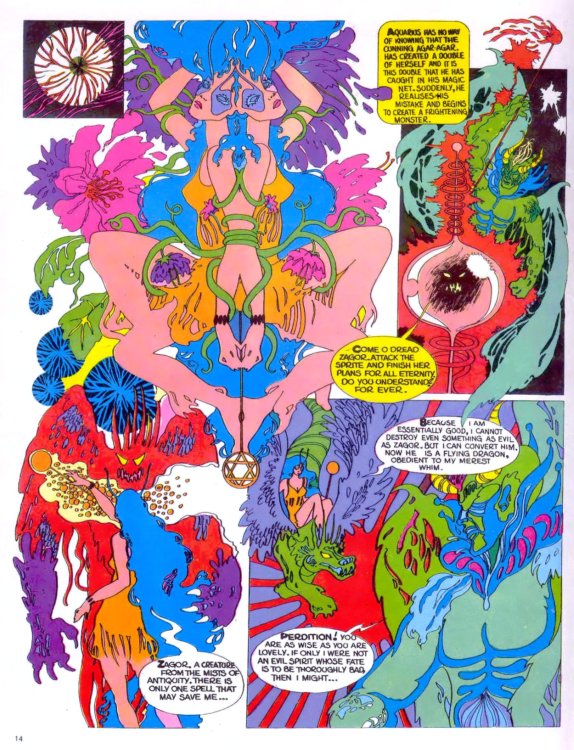 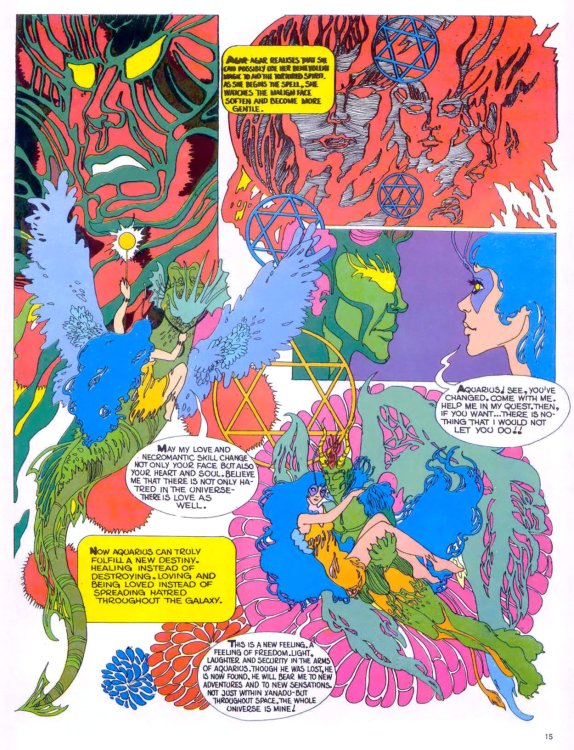 "This is the dawning of the Age of Aquarius...Age of Aquarius..."
Oops, sorry, got carried away there for a second.
This surreal mini-series had a half-dozen installments, each one weirder than the previous.
Illustrated in a Peter Max-esque style by Alberto Solsona.
Written by Luis Gasca under the pen-name Sadko (which he also used as the scripter on Wolff, another strip in Dracula, illustrated by Estaban Maroto, which we'll be running in Hero Histories™).
Published in England as part of Dracula (1971), a 12-issue partworks by New English Library, the first 3 tales made their American debut in Warren Publishing's Dracula TPB which reprinted #1-#6 of the British Dracula's run.
The remaining 3 stories have been unseen by American audiences, but will be posted here over the next few months.
It'll be a groovy trip, baby! 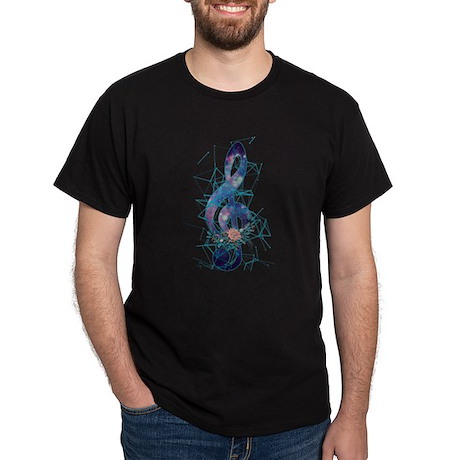